After an Iranian missile attack this January, over 100 US service members tested positive Traumatic Brain Injury or TBI. Still, President Trump and other officials declared ‘no one was wounded’ during the attack. TBI is still a poorly understood condition by the general population, which might explain why the President said he doesn’t consider them to be as serious as physical combat wounds, referring to them as headaches. This couldn’t be further from the truth, though. Traumatic brain injuries can be serious, and they are more common than you would think. Military leaders say TBI was one of the signature wounds of the wars in Iraq and Afghanistan. However, it isn’t just veterans affected by TBI.

March is Brain Injury Awareness Month, with this year’s theme being ‘Change Your Mind’. To that end, here’s a primer on everything you need to know about TBI, one of the main forms of brain injury.

What is a traumatic brain injury?

The CDC defines traumatic brain injury as a ‘disruption in the normal function of the brain’ typically caused by a sudden, violent blow or jolt to the head, or in some cases, a penetrating head injury.

Symptoms of traumatic brain injury are generally caused when the brain collides with the inside of the skull, causing bruising, tearing of nerve fibers, or internal bleeding. If there’s too much pressure on blood vessels, it could also restrict oxygen flow and nutrients to the brain. Impact of the injury is usually determined by which part or parts of the brain were affected, and how badly.

What are the symptoms of traumatic brain injury?

TBI can cause an entire spectrum of symptoms, depending again on where and how the brain was impacted. This is because each part of the brain has a different function. For example, an injury of the temporal lobe - located behind the ears - could cause problems in comprehension, emotion, and sensory input among other things. A frontal lobe injury - located at the front of the head - could impair judgment, memory, and problem-solving skills.

Symptoms could crop up at any time – as early as 24 hours after the injury to days or weeks later.

Milder cases, like concussions, can cause temporary confusion and headaches. More serious TBI can lead to a loss of consciousness, convulsions, severe headaches, mood changes, amnesia or long-term impairment.

What are the causes of traumatic brain injury? 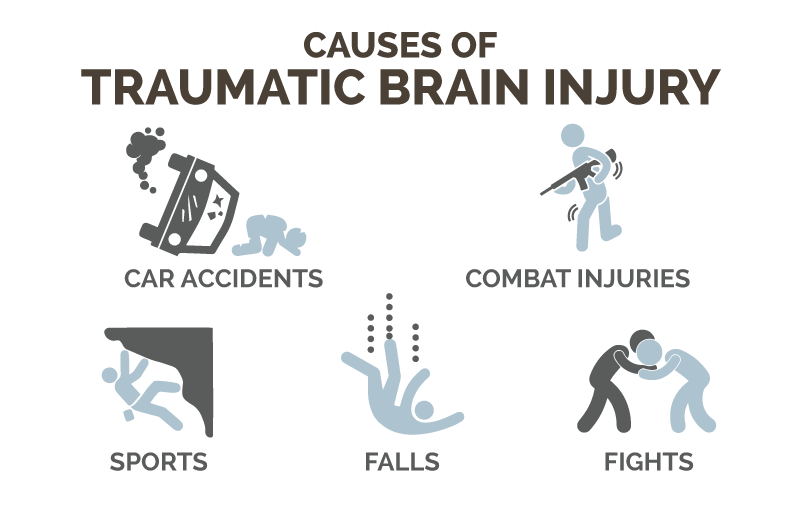 Traumatic brain injuries are caused, simply put, by a severe jolt or blow to the head. This is very commonly seen in:

How dangerous can traumatic brain injuries be?

In the initial period after the injury, complications such as seizures, infections, nerve damage, cognitive changes or personality changes may arise. Sometimes, however, TBIs can have significant long-term effects.

What are the effects of traumatic brain injury?

The long-term effects of TBI can be of 3 major types:

There is evidence that TBI or repeated TBIs can lead to an increased risk of dementia and other neurological disorders. There is also some correlation in the number of concussions and depression scores in players of high-impact sports like football.

How could you prevent a traumatic brain injury?

Basic health and safety measures could potentially prevent a TBI.

How do you cope with life after a traumatic brain injury?

Medical interventions like surgery can deal with the immediate impact of the trauma, while physical and mental rehabilitation can help with some of the long-term effects. In general, making sure that one doesn’t expose themselves to a situation where they could suffer another TBI, and getting adequate rest is advised.

Because TBI is a complex mechanism, there isn’t really a cure-all for it. A number of successful strategies will likely be more effective than just one.

There is a growing body of evidence that suggests that CBD or cannabidiol could help with some difficulties such as sleeplessness, headaches or other forms of pain. The neuroprotectant and antioxidant properties of CBD are already well-known, which is why researchers have been working at seeing whether there are applications for it in TBIs.[1][2][3] Some clinical trials are underway as well, with promising early results.[4][5]

How can you help a friend who has suffered a traumatic brain injury?

If someone you know has a traumatic brain injury, it might be very difficult to understand what they are going through. As a friend, you might observe some of the following changes in the person you know:

These are just a few things you might experience when interacting with a person with a TBI. It can be frustrating sometimes, but you have to remember: this person has suffered a great deal. A little patience goes a long way. You wouldn’t expect a paraplegic to run up a flight of stairs, so don’t judge a person with a TBI when they show social symptoms. Be kind.

The Brain Injury Association of America leads the nation in observing Brain Injury Awareness Month. The theme for 2018-2020 is Change Your Mind. Want to do your bit this March? You could start small by spreading awareness amongst the general public about the incidence of brain injury, the needs of people with brain injuries and their families. Awareness leads to de-stigmatization, which is the first step to emotional healing.