Balance is something we’re all looking for in some way or the other. A balance between different areas of our lives, balance within our bodies and balance in our minds. One of the reasons why CBD has grown so popular is because people believe that it has helped them achieve a state of balance that they longed for. The way that CBD does this is by interacting with the endocannabinoid system or ECS. Researchers now believe that the recently discovered ECS may play a key role in many bodily processes and that a malfunctioning ECS – or an endocannabinoid deficiency – may consequently upset other bodily processes.

What is the endocannabinoid system?

Before diving into the functioning of the ECS, it helps to get familiar with the concept of homeostasis.

Homeostasis is, in simple terms, balance. Unbeknownst to you, your body is constantly striving for a state of balance or homeostasis. Considering that your body is going to be exposed to so many different environments even over the course of a single day, it needs to maintain some kind of neutral zone of functioning. If your body temperature is too high, it attempts to bring it down by sweating. If you’re running low on glucose, your body will signal hunger pangs. And the system that coordinates these attempts at homeostasis, is the endocannabinoid system. Research suggests that the ECS not only deals with physical balance but mental balance too. It works to keep neurotransmitters in a state of homeostasis for a more balanced mood.[1]

How does the endocannabinoid system work? 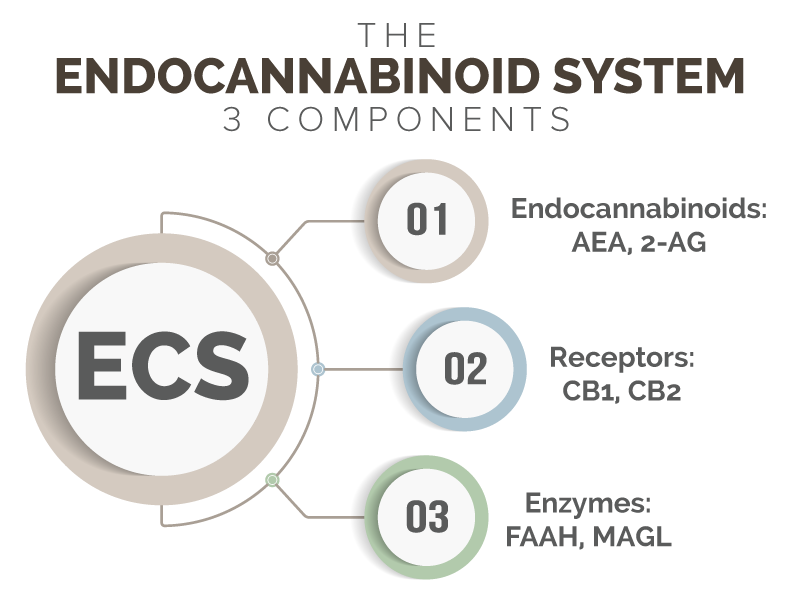 The endocannabinoid system has 3 separate components that help it function:

What does the endocannabinoid system work on? 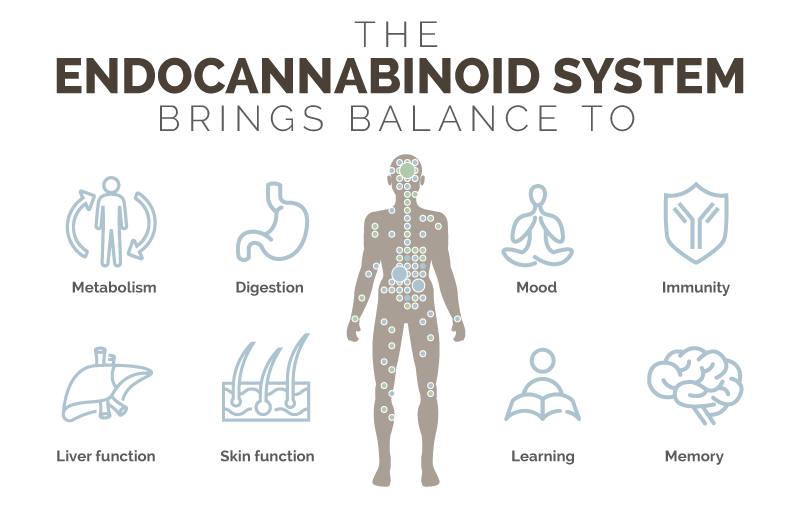 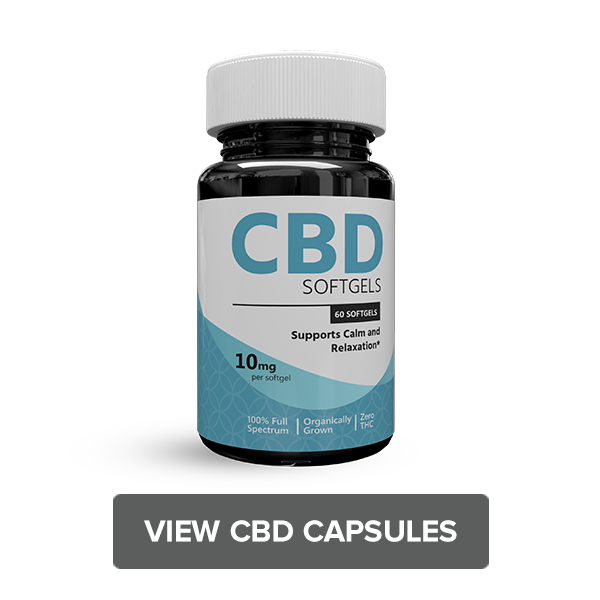 The ECS is still being studied, but current research suggests it could play a role in several processes, including:

The incredible thing about the endocannabinoid system is its targeted response that affects only the processes that are out of balance. For instance, endocannabinoids might target CB1 receptors in only a spinal nerve to relieve pain. Additionally, if your hormones are out of sync, it can work to regulate them without affecting any other processes. It’s a precise response that is constantly working to maintain homeostasis.

What is an endocannabinoid deficiency?

CECD, or clinical endocannabinoid deficiency is currently a theory that the medical community is researching. It hypothesizes that low endocannabinoid levels can lead to systemic problems in the body. Ethan Russo MD, Director of Research and Development of the International Cannabis and Cannabinoids Institute can be credited with first developing the theory of CECD in 2001.

What issues could be linked to CECD?

Medicine has come very far, but we still don’t know a lot about why some very common problems occur. Researchers studying CECD are now investigating whether it may explain lesser-understood disorders such as migraines, IBS (irritable bowel syndrome) and fibromyalgia.[3] Not only are the causes of these distresses unclear, but they can also be difficult to treat. Doctors sometimes refer to them as ‘central sensitivity syndromes’ because they share symptoms, usually pain. Central sensitivity syndromes also usually involve more than one bodily system. For instance, one could link fibromyalgia to the nervous systems, the endocrine system, and the immune system too. All of these systems have several endocannabinoid receptors. If research could establish a connection between these and CECD, it could improve the quality of life for several people.

There are other bodily processes that can work the same way. A very common theory about the cause of depression is that it stems from a serotonin deficiency – even though this is still debatable. Russo also suggests that

Current researchlow levels of endocannabinoids could have a similar effect on other organs. It’s important to note that CECD is not a disease itself, but an umbrella term that covers different issues that may share this common factor.

Research at this stage is very limited, but what studies have found is that migraine sufferers may have lower levels of anandamide in their cerebrospinal fluid, similar to fibromyalgia patients.[4] Additionally, there is some evidence that people suffering from PTSD have decreased ECS function. Russo’s 2016 paper says, “If endocannabinoid function were decreased, it follows that a lowered pain threshold would be operative, along with derangements of digestion, mood, and sleep among the almost universal physiological systems subserved by the endocannabinoid system (ECS).”

What can you do to support your ECS?

Keeping the balance of beneficial bacterial flora in your gut has been linked to a healthier functioning ECS. Avoid taking unnecessary antibiotics, and support your gut with pre and probiotics.

Physical activity supports the ECS. In fact, the ‘runners high’ that was commonly attributed to endorphins may actually be due to a spike in levels of anandamide after aerobic activity. Those dealing with pain might find this understandably challenging, but low-impact activities such as yoga may have benefits for the ECS as well and could be less painful to do.

An ECS that’s out of balance could lead to less sleep, which in turn can cause the ECS to get further out of balance, creating a vicious cycle. Making sure to get at least 7 hours a night can strengthen the ECS.

CBD or cannabidiol is a cannabinoid in the hemp plant that is similar in structure to the body’s own endocannabinoids. This led researchers to initially believe that CBD simply mimics the endocannabinoids and binds to receptor sites. However, no evidence for this was discovered. Instead, experts say that CBD blocks enzymes like FAAH from breaking down endocannabinoids like anandamide in the body. This allows the endocannabinoids to stick around longer and give your body more sustained benefits. People that take CBD say that it has helped with stress, pain and other common complaints.

There are several foods you can consume for a better functioning ECS. Any foods high in trans-fats or extremely calorie dense (aka, junk food) is bad for the ECS. Here are some foods or ingredients you can opt for instead:

Meditation and breathing exercises can also increase endocannabinoid activity. These can lower stress levels, which is yet another way to support the ECS.As you can surmise, the ‘how-to’ section on enhancing your ECS looks a lot like the general tips for maintaining good health. That’s because the ECS appears to be tied to so many organs, that pretty much any activity that can support overall health will probably be beneficial to the ECS in some way. The same seems to be true for mental health. Because the ECS is so present in the brain, taking care of your mental health can support the ECS too! The more you invest in it, the more benefits you reap. Take care of your ECS, and it will take care of you too.