Over 15 million people in the United States struggle with alcoholism, but less than 8% of those receive treatment for it. What is alcoholism? A widely accepted benchmark is the (consistent) consumption of more than 7 drinks a week for a woman or 14 for a man. April is Alcohol Awareness Month, which doesn’t just mean recognizing those who currently struggle with it, but also those that are at risk of developing the condition. One of the many reasons that people may turn to alcohol is in order to cope with life’s difficulties, also known as ‘self-medicating’ with alcohol. The process of self-medicating can often be slow and spotted early, whether in oneself or in others. Let’s delve a little deeper into this phenomenon as well as exploring better ways to deal with stress.

What does self-medication mean?

Broadly speaking, self-medication is the act of taking any unprescribed substance in order to ‘treat’ or cope with physical or psychological distress.

What are the substances chosen when self-medicating? 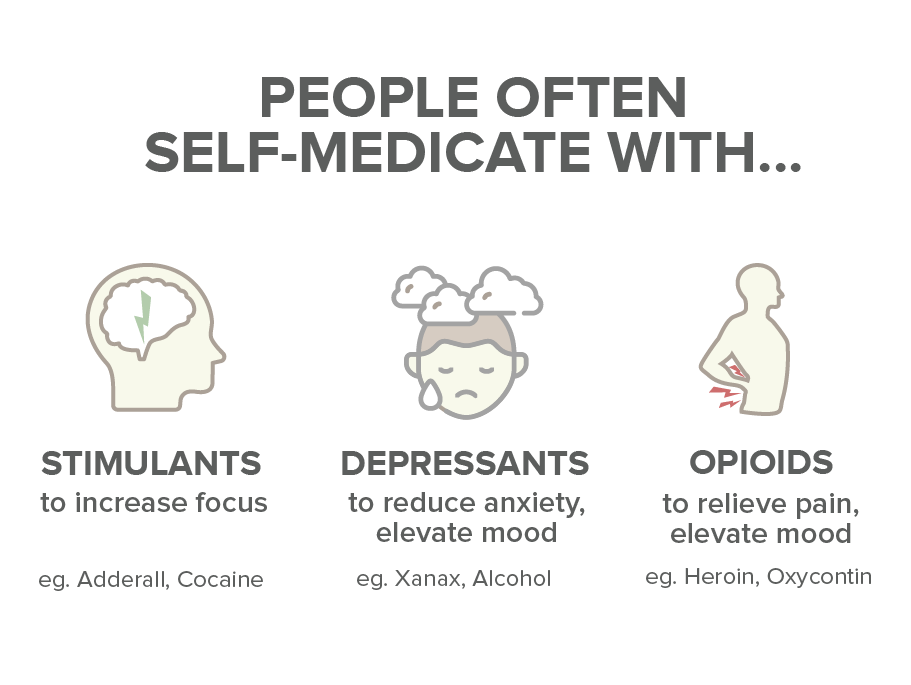 You’ll find that some of the above are prescription drugs, like Xanax or Ambien, while some are illicit, like cocaine or meth. Alcohol, on the other hand, is both legal and widely available, which means it’s especially easy to kickstart the process of self-medicating using alcohol.

Why do people self-medicate with alcohol?

There’s a pretty high correlation between mental illness and substance abuse disorders like alcoholism, which seemingly indicates that individuals are very likely using alcohol to cope and/or feel better. In fact, much like non-alcoholics view legitimate medications as a good strategy to cope with illness, alcoholics may genuinely believe that they are effectively solving their problems.

What are the issues that people may self-medicate for? 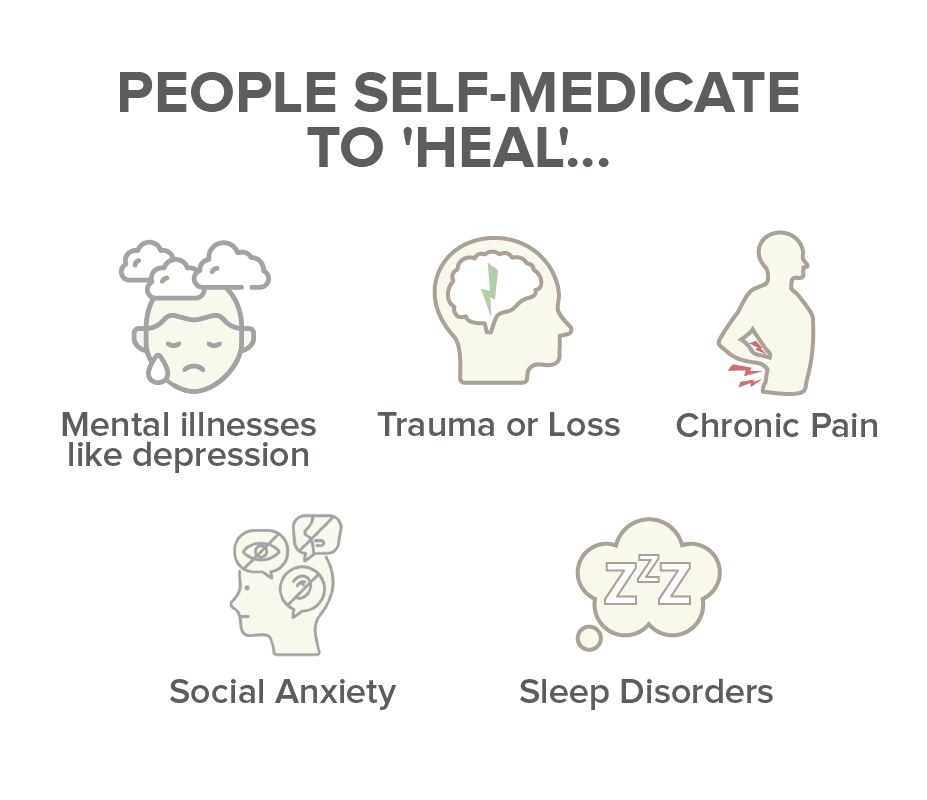 An umbrella term for all the above might be stress. In the absence of effective coping mechanisms, people turn to alcohol in order to deal with stress. The National Institute on Drug Abuse has also talked extensively about the connection between stress and substance abuse.[1]

What is the connection between trauma and self-medication?

Stressors like bereavement and trauma can often steer people towards alcohol or drugs. In individuals who have abstained from drugs for a while, it can also lead to relapses. Serious trauma often triggers PTSD or Post-traumatic Stress Disorder, which comes with symptoms like sleeplessness, stress and avoidant behavior.

The link between PTSD and alcoholism is pretty clear. Among people who abuse alcohol, a large proportion also meets the criteria for PTSD. In these populations, alcohol provides an easy, inexpensive and fast way to cope with pain and stress. It allows an escape from reality, albeit short-lived.

Why is alcohol used to deal with trauma?

PTSD, stress disorders and depression may often present with an overactive amygdala and prefrontal cortex. Alcohol, as a central nervous system depressant, could actually reduce activity in these areas and provide temporary respite from the stress. Eventually, of course, withdrawal from alcohol itself can cause the same feelings of stress, keeping individuals addicted to alcohol so that they don’t have to deal with withdrawal.

What are the dangers of self-medicating with alcohol?

The primary risk would obviously be alcohol abuse. This occurs because repeated alcohol use can alter brain chemistry as dependence grows. When alcohol is no longer consumed, the brain can’t function as it normally does, leading to stress or pain that is much worse than it was to begin with.

Drinking can also interfere with other medications an individual might be taking, increasing the risk of adverse side effects.

What are signs that you or someone you know might be self-medicating with alcohol?

When a major life event compels one to find ways to cope, there are many healthier alternatives than self-medicating. Of course, this list doesn’t include legitimate medication under the guidance of a licensed medical professional – in many cases, that can be the best option to explore. However, other ways to cope with stress may include:

Self-medicating with alcohol is dangerous and will only make things worse in the long-term. Eventually, alcohol withdrawal becomes the symptom for which one must self-medicate, creating an endless loop. If you or someone you know is self-medicating, it’s best to seek help sooner rather than later. Find out more about Alcohol Awareness Month here.