Pretty much everyone has experienced it during the pandemic. You’re watching a TV show, trying to focus on the story, but you can’t seem to get past the fact that all the characters are able to shake hands, hug and kiss without a care in the world. Social distancing has changed a lot of things about how we interact, but perhaps one of the most detrimental to our minds is the lack of physical touch. Plenty of research supports the fact that physical touch is an important component of holistic health, but several people across the world don’t need the research to tell them that – they’re feeling the very real effects of social isolation themselves.

What are the benefits of physical touch? 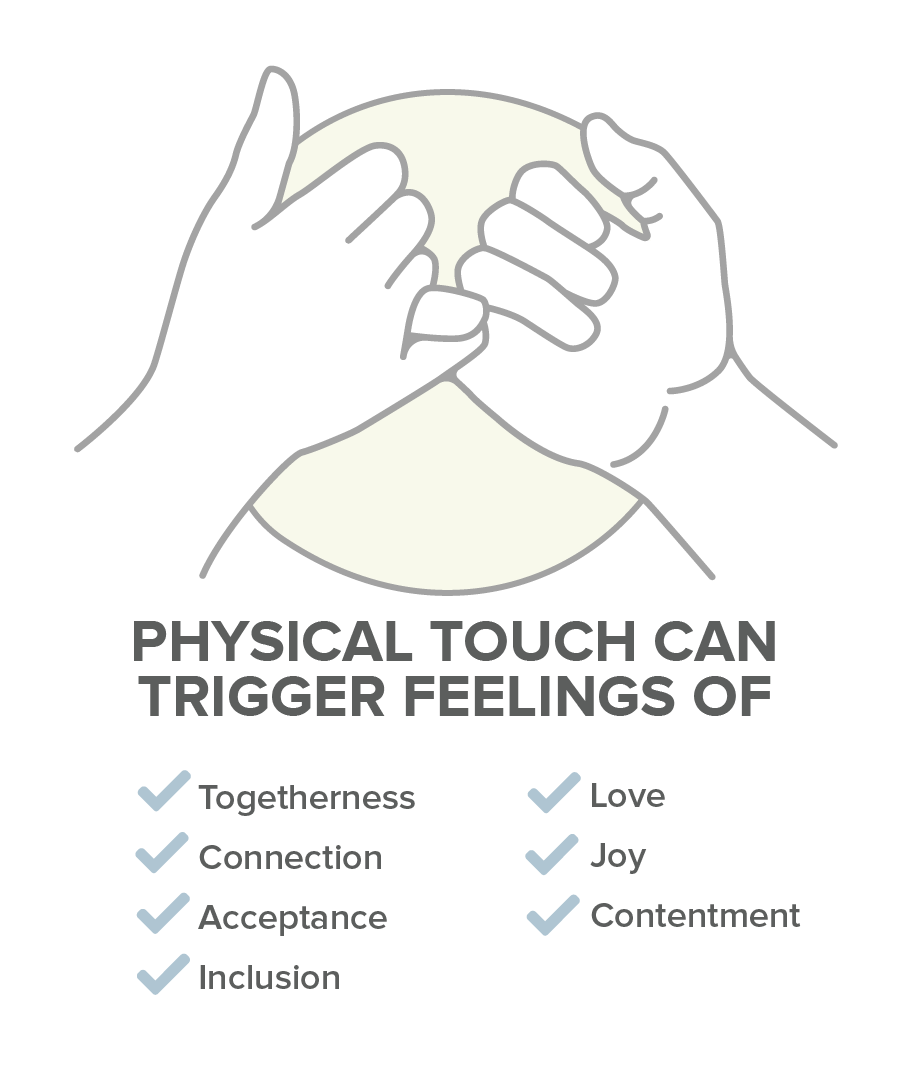 Over millions of years of evolution, touch has become one of the most powerful signals of togetherness. This means touch allows us to foster a social connection. Much like our ancestors, we evolved to live in groups and connect with each other, and touch is a primal way to communicate that connection. That’s one of the reasons why trying to self-soothe by patting yourself on the back will not achieve the same effect as a friend patting you on the back.

Brooke Feeney, a psychologist at Carnegie Mellon has long studied the effects of physical touch. She suggests that touch is a simple yet effective intervention for improving relationships and enhancing social connection. Affectionate touch lets one feel accepted, included, loved, and cared for. In fact, when a child is born, they first bond with their mother through touch. The use of touch as a medical intervention is not a novel concept. When babies are born prematurely, parents (particularly mothers) are asked to hold the baby against their chest for periods of time every day. This skin-on-skin contact is beneficial for the growth of the baby.

As adults, touch continues to help boost immunity as a 2014 study shows – hugging can help one’s body fight an infection!

Why does human touch feel good?

Some of our closest primate relatives are extremely social, and one of the ways that they bond with each other is through social grooming – combing through fur, picking out insects or dirt, etc. Human bodies have grown to treasure this kind of touch. It triggers the release of oxytocin (commonly known as the cuddle hormone), which promotes feelings of trust, bonding, safety, and social connection, and also calms worries. We may have lost the fur, but our brains still have the same reaction to stroking, cuddling, and patting.

What happens when we are deprived of physical touch?

With social distancing, the touch we once took for granted is pretty much off-limits. Hugs, handshakes, even a slap on the back is discouraged. And even as much of the internet has long claimed to enjoy solitude, it’s rather different when solitude is enforced instead of chosen. Even total introverts may feel the effects of social isolation, albeit subconsciously.

Social touch lets us feel safe and supported, and the long-term deprivation of it may lead to some uncomfortable side effects. The brain may sense that one is unsafe or not secure enough, which can lead to the frequent triggering of the fight-or-flight response without even being aware of it. What this means is, people might notice that their general stress levels have increased, they are more sensitive to triggers that they might not have noticed before and might find themselves more irritable or fearful.

How do you deal with the lack of physical touch during a pandemic? 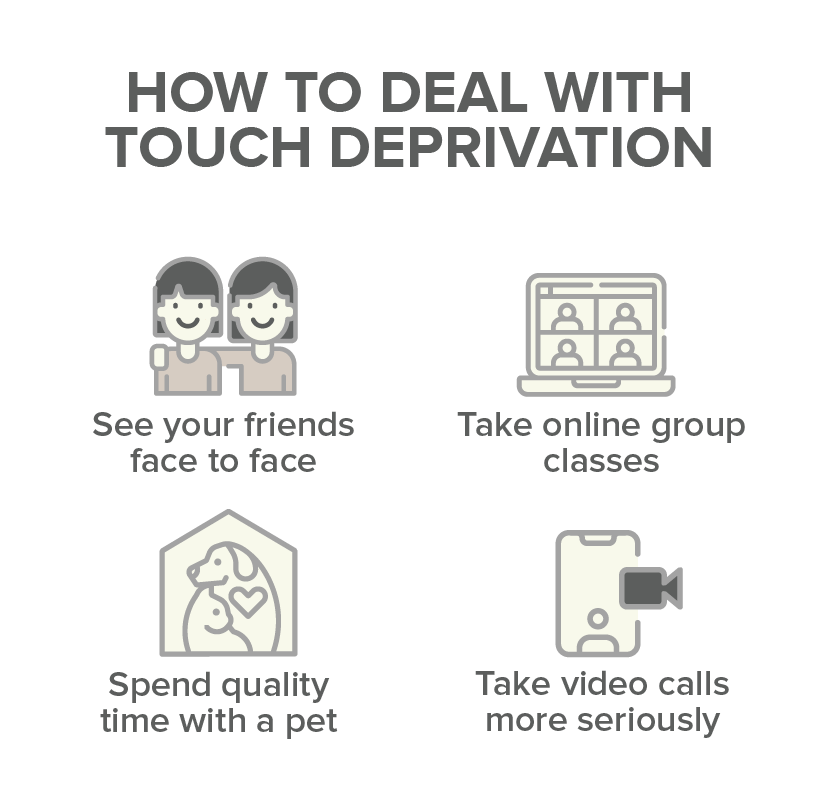 Meet your closest friends – with some safety measures.

There are likely some relationships in your life that don’t feel quite the same despite regular video calls. Form a social ‘pod’ with your closest friends, plan to meet at an outdoor location, limited to 4-5 people so that everyone can really get a chance to have a deep, meaningful interaction. Hugging may still be off-limits, but eye contact and laughter also trigger the release of oxytocin and can help solidify feelings of safety and wellbeing while maintaining social distancing.

Video chatting, when combined with a group activity like singing, dancing, or yoga, can help promote feelings of togetherness and security. So, if you plan to do a video workout, try to make it a class that is live instead of pre-recorded, and with a group instead of solo.

Spend time with your pets.

Pets probably don’t get to spend that much time with you while you’re out and about, so this is an excellent time to give them all the love you can. The best part is, it’s a two-way street! Stroking, hugging, or touching an animal can trigger the release of feel-good chemicals, including oxytocin, serotonin, and dopamine, reducing the effects of social isolation.

The sheer volume of video calls one has to take part in could be overwhelming, especially if you’re doing it as part of your job as well. However, there are a few ways to make sure that when you do speak to friends, the conversation is mutually beneficial.

Clear some time from your schedule. A lot of us have gotten used to doing video calls during virtually any other activity, but try to clear some time out to just sit and connect with a friend, perhaps with a coffee or glass of wine. This can foster a deeper conversation and connection.

Make sure both sides participate equally. When you call someone, make sure you and the other member are equally participative in the conversation. When we can’t physically see someone, we miss a lot of social cues that tell us something is bothering them or if they’re bored. Have a mental clock that tells you if you’ve been talking too long, and remember to ask how the other person is feeling.

Hide your self-view. We’re all guilty of being distracted by our own faces during video calls, but that isn’t doing your friendship any favors. You may find the conversation is a lot more enjoyable when you can only see your friends.

The benefits of social touch can’t be talked about enough, but it should also be noted that humans are an incredibly resilient species, and while we have been deprived of this key part of our lives due to social distancing, it doesn’t mean it’s going to lead to a socio-cultural breakdown. Prioritizing the relationships in your life is more important than ever – even though it doesn’t seem significant enough with everything else going on. The effects are insidious and creep up on mental health slowly. Like George Santayana said, “One’s friends are that part of the human race with which one can be human.”