April is Alcohol Awareness Month, and while there may be other health concerns to focus on right now, that doesn’t diminish the importance of spreading awareness about pressing issues.

The first step to healing from an alcohol addiction is recognizing that it exists. The next step – quitting alcohol – is a lot harder. Not only does one now have to find other ways to cope with stressors instead of reaching for a drink, but they must also deal with alcohol withdrawal. In fact, after a while, alcohol abuse is fueled primarily by the need to escape withdrawal symptoms. So, what does alcohol withdrawal look like, and how do people cope with it?

What is alcohol withdrawal?

Alcohol withdrawal is the umbrella term given to the range of changes the body goes through when one suddenly stops consuming alcohol after prolonged heavy alcohol use or abuse.

What are the symptoms of alcohol withdrawal? 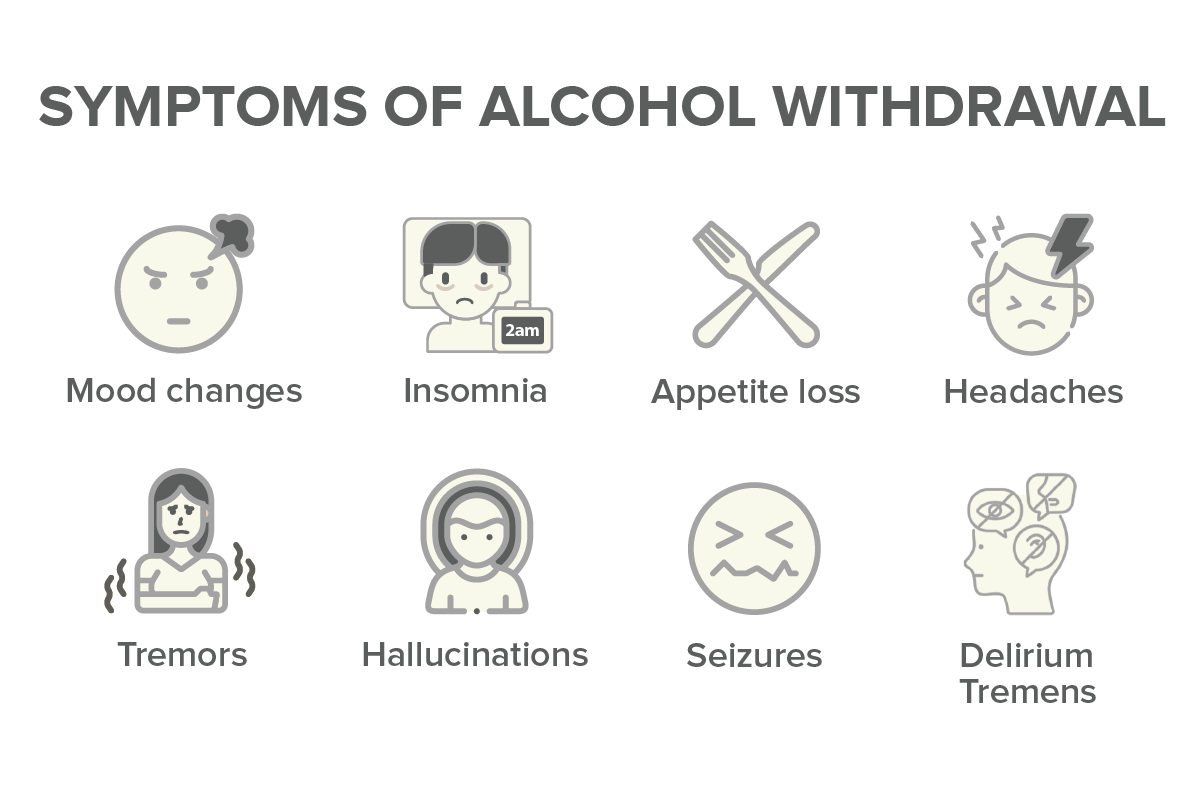 Different people experience withdrawal differently depending on their individual brain chemistry and the severity of their alcohol use. The following are some symptoms, both common and uncommon, of alcohol withdrawal.

Stress, irritability, depression and anger can often occur during withdrawal, either alone or in swings. The depression can feel deeper than everyday sadness, accompanied by a sense of loss, low self-worth or emptiness. Stress is natural during withdrawal since the coping mechanism for stress – aka, drinking – is taken away from the alcohol user.

These mood swings are hard for both the person experiencing them and ones around them, but they are usually temporary and soon pass.

Sleep disturbances are extremely common among those who quit drinking. It’s important to treat sleep problems in order to prevent relapse. Part of the reason this occurs is that many people with pre-existing sleep problems may have originally turned to alcohol in order to fall asleep. In fact, almost 20% of adults in the United States use alcohol to help with sleep. When alcohol consumption stops, sleep disturbances can be of different kinds - more frequent awakenings, worse sleep quality or earlier-than-usual waking times.

Appetite loss accompanied by nausea is a common symptom of withdrawal. This might occur due to changes in one’s stomach lining over time due to alcohol use.

Withdrawal can cause persistent headaches or ones that come in waves. These occur for a variety of reasons, both physical and psychological, and may persist for as long as 6 months after the last drink.

Tremors or shakes are less common, and begin the same day or the day after the last drink was consumed. These can be accompanied by increased heart rate and blood pressure, hyperventilation, sweats and nausea.

Even less frequent is alcohol hallucinosis, a symptom of withdrawal wherein one may hear things that aren’t real. In rare cases, these hallucinations can be visual.

A rare, dangerous symptom of alcohol withdrawal. Consistent heavy drinking causes changes in brain chemistry and functioning, and the undoing of these changes can sometimes trigger seizures.

Delirium tremens or ‘the DTs’ involves confusion, shaking and hallucinations and is also an extremely dangerous complication of alcohol withdrawal, occurring in 3-5% of those who withdraw from heavy drinking. It can also cause sweating, disorientation, breathing difficulties and dehydration. Experts believe that some of the symptoms are caused by a reduction in blood flow to the brain, and if left untreated, can be fatal.

Why does alcohol withdrawal occur?

Alcohol is a depressant, which means it has a slowing or sedating effect on the brain. In long-time drinkers, this continual depressant effect changes the way the brain functions. The brain adapts to compensate for the effect of the alcohol, and even changes the way nerves communicate with each other.

One of the ways it does this is by producing greater quantities of naturally stimulating chemicals. When the supply of alcohol is suddenly cut off, the brain takes time to readjust, and remains in this hyped up state for a while. This is what causes most withdrawal symptoms.

How can one manage alcohol withdrawal?

Depending on severity of withdrawal, there are several ways one can handle it. It is imperative to consult a doctor before coming up with a withdrawal plan.

How to handle mild-moderate alcohol withdrawal.

How to handle moderate-severe alcohol withdrawal.

Moderate to severe withdrawal needs to be dealt with in a hospital setting, so that vital signs such as heart rate, blood pressure and breathing can be closely monitored.

Needless to say, whatever form one’s alcohol withdrawal takes, the most important part of dealing with it would be to give up drinking for good, so that one never needs to experience the pains of withdrawal again.

Alcohol abuse can create a shortage of essential vitamins and minerals such as folate, thiamine, magnesium, zinc and phosphate. It can also lower blood sugar. This is why it’s so important to set up a healthy vitamin regimen once one gives up drinking. Similarly, there has been research on other ways to bolster the body while it goes through withdrawal. These aren’t treatments, but could be thought of more along the lines of physical and mental support.

While there’s no easy way to begin the process of cutting alcohol out of one’s life, there are things that can cushion the blow. Having friends around, a counsellor to talk to, and a doctor to work with, are all things that can help ease the transition. It’s important when dealing with withdrawal to be honest about one's drinking history so that advisors know how to proceed. While it’s difficult to be honest even with oneself, that tiny step could be the difference between a painful withdrawal and an easier one.