Hemp and CBD-related laws are in a state of flux all over the country. Federal law states that hemp-derived CBD is 100% legal in the United States, but the issue gets a little more unclear at the state level.

The issue stems from the fact that for the longest time, federal law made no distinction between hemp and marijuana. CBD, which primarily comes from hemp, was made illegal along with marijuana and all other strains of cannabis in the 70s. The 2018 Farm Bill made hemp legal but didn’t make any provisions for the growing of hemp, leaving it to state regulatory bodies to figure out. Reciprocally, state hemp farming programs may be illegal at the federal level. It’s easy to see how this could be very confusing.

If you’re from Indiana, wondering whether you can get CBD oil in Indiana, or if you simply want to know more about the laws on CBD in Indiana, we’ve got you covered.

Is CBD Oil Legal in Indiana?

What does the law say about CBD Oil in Indiana? 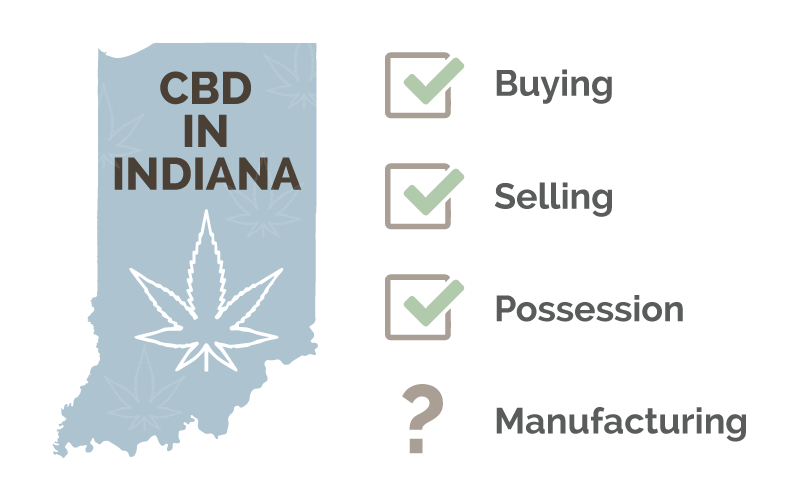 In March 2018, Indiana Governor Eric Holcomb signed Senate Bill 52, which is a measure legalizing CBD oil in Indiana. With the signing of Senate Bill 52, anyone can buy, sell, and possess CBD oil as long as it meets certain requirements. It should be noted, however, that the law doesn’t say much about the legality of manufacturing CBD oil in Indiana.

What are the requirements for CBD Oil in Indiana?

According to Indiana law, CBD manufacturers have to follow certain guidelines, including:

The law says that all manufacturers need to have each batch of CBD products tested for traces of THC. Anything with more than 0.3% THC is illegal.

The bill asserts that all CBD products need to have a QR code on the label, which, when scanned provides information on the batch. This includes all ingredients, as well as the companies that those ingredients were sourced from. This requirement made several CBD oil manufacturers get distinct labels printed just for Indiana.

In 2017, a bill legalizing CBD oil for certain patients on a registry was signed by Gov Holcomb. What the bill didn’t provide for, however, was a legal route for those patients to get it. In the confusing times that followed, police routinely confiscated CBD oil from retailers. In November 2017, Attorney General Hill issued a legal opinion declaring CBD oil illegal.

In order to fix this state of contradictions, politicians and activists pushed for Senate Bill 52, legalizing CBD on March 21st, 2018. This was even before President Trump signed the now famous $867 billion Farm Bill in December 2018, which would provide billions in aid to US farmers, and give support to farmers looking to grow hemp.

The law as it is right now has legalized it to make it accessible first and foremost to those who require Epidiolex for the treatment of certain conditions and secondly to those who want to enjoy CBD for its health benefits. However, state representatives still believe that a lot still needs to be ironed out, and they may have to revisit the bill in a year’s time to make revisions.

Prior to its legalization, Indiana was one of 3 states with the most consistent interest in CBD Oil, according to a survey of search data by Remedy Review.

Is marijuana legal in Indiana?

Marijuana remains 100% illegal in Indiana, and the state comes down pretty hard on products with more than the legal amount of THC in them. With respect to drug testing, there is zero-tolerance for THC and its metabolites (which are the byproducts of your body breaking the THC down). This means even trace amounts of THC could get you in trouble in Indiana.

In order to avoid this, it’s imperative that you know where your CBD comes from. Marijuana-derived CBD will likely contain significant amounts of THC. It is difficult for hemp-derived CBD to have a substantial amount of CBD since the hemp plant itself has no more than 0.3% THC. However, if you’re taking large enough doses of CBD, it could, over time, build detectable amounts of THC in your blood. This is possible even if you aren’t feeling ‘high’. To completely avoid any risk, opt for THC-free CBD.

The demand to have marijuana legalized in Indiana seems to be astounding, but the pushback has been relentless. Several bills on marijuana legalization have already been passed but none approved.

The state of Indiana also cracks down on retailers attempting to sell marijuana, marijuana-derived CBD or high THC CBD. Retailers found to be stocking marijuana could be looking at up to 6 years in prison and thousands of dollars in fines. If found to have a product in their store containing more than 0.3% THC, a retailer could have their license revoked or get fined a hefty amount.

Where to buy CBD Oil in Indiana

CBD Oil can be purchased at most vape shops, some beauty salons, and health-related businesses. However, many users prefer not to buy locally and shop online instead. This is because reports of products that are misleading or mislabeled are common, and products in-store do not always have lab reports available to check quality and potency.

Things are looking good for CBD Oil in Indiana, and the rest of the United States too. Hoosiers can look forward to more relaxed legislation in the years to come, which should be a relief for retailers in the state as well. Want information on any more state-specific laws on CBD? Let us know!