The current environment surrounding CBD and hemp is perfect for the growth and sustenance of many myths. Media is divided on the topic – either CBD is a scam, or a cure-all for everything. This has led those who haven’t done adequate research to make tons of false assumptions about CBD. In the chaos, there are a few misconceptions that crop up more often than others. We’re here to break them down so you can separate fact from fiction and choose CBD for the right reasons.

CBD affects everyone in different ways. Someone with an  endocannabinoid system that is out of balance will feel the effects of CBD much sooner than someone with a healthier endocannabinoid tone. Essentially, any universal ‘timeline’ for how long CBD takes to work is flawed, because everybody is unique. You might take CBD on the recommendation of someone who felt the benefits instantly, but you might need to take it for a few weeks to feel the effects. This doesn’t mean that the CBD doesn’t work, it just means your body is different. This is why most CBD brands would recommend consistent use for a few weeks. And this makes sense too - because if you’ve already made the decision to invest in a CBD product, why not use it for longer to see if it could bring you great results?

As CBD takes over the health, wellness and beauty industry, consumers will rightly start to wonder: what does this compound do? But that’s the thing about buzzwords in wellness. Once something is established as beneficial, brands rush to add it to their arsenal of products, and that’s currently happening with CBD. While being cognizant of the fact that the wellness industry is out to make money, it’s important to keep in mind that this doesn’t invalidate CBD’s actual benefits. In other words, just because CBD is being randomly added to several products (in ways that won’t even work), doesn’t mean that it shouldn’t be added to any products. For instance, CBD is a potent calming agent when applied to the skin as a balm, but could be redundant in, say, your face wash. 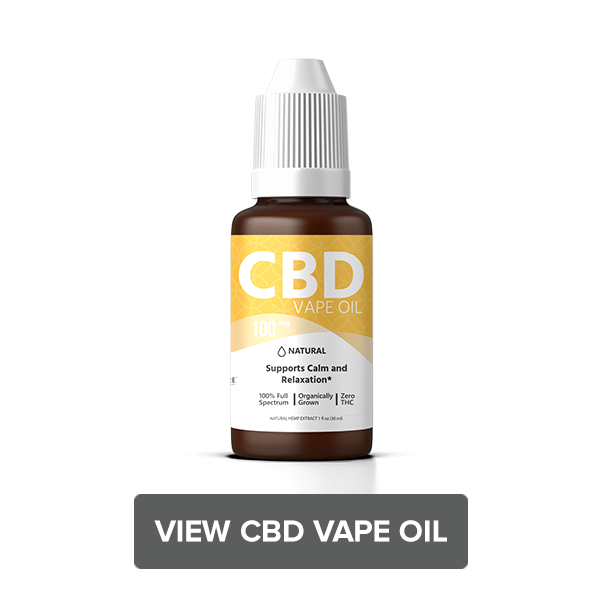 The pharmaceutical industry has propagated several theories about supplementation, one of them being that isolated compounds work better than whole plant solutions. In recent years, however, research has suggested that the different cannabinoids in a cannabis plant may work in synergy with each other, increasing the  bioavailability of each compound. Moreover, newer studies are being conducted on other cannabinoids and terpenes in the hemp plant that may have independent benefits. It may seem like isolated CBD gives you the ‘purest’ dose of CBD, but some might find far better success with a broad-spectrum blend instead. 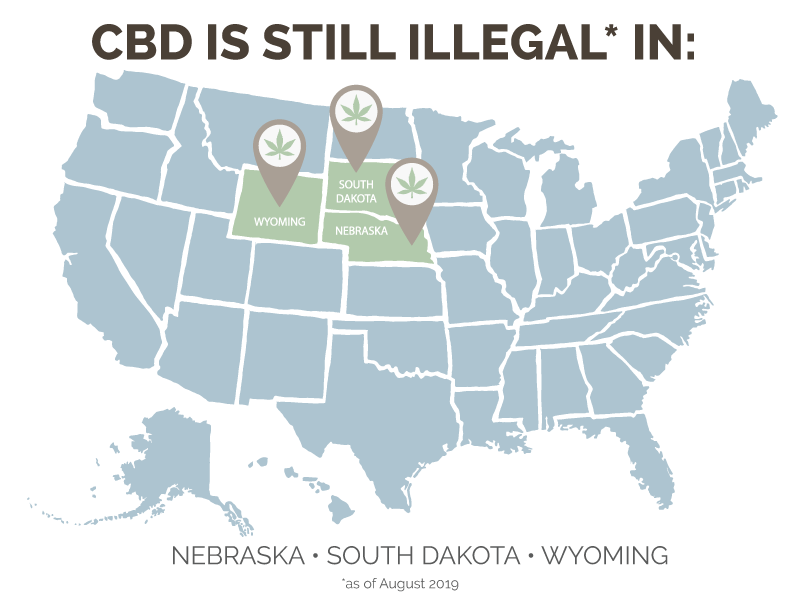 This is a myth that isn’t really wrong per se, but has been repeatedly misunderstood and popularized. In December 2018, the Agriculture Improvement Act or  Farm Bill was passed, and it fully legalized CBD and hemp at the federal level. A logical conclusion to draw is that you can legally take CBD wherever you want in the US, but this isn’t true. State laws vary on CBD, and even though legislation has changed at the federal level, some states still come down hard on hemp and CBD related matters. Until a state updates their legislation to match the federal law, CBD might still be illegal in that state. What this means is you could get caught for possession of CBD in states where it is explicitly illegal. On the bright side, several states including New York, Illinois, Oregon, Texas and many more have legalized the production and sale of CBD. Other ‘unfriendly’ states are opening up to the idea of legalization as well, and one would hope that they update their laws soon!

A popular misconception among the general population that could be attributed to the wellness industry is that CBD is a viable treatment option for most health conditions, some of which may be fairly serious ones. This is not to say that early studies on CBD have not turned out promising results, but claims of what it can do range from the feasible to the downright ridiculous. When clickbait websites and wellness brands claim that CBD can ‘cure’ a condition, they are setting themselves and the CBD industry up for failure. False promises lead to false hope, which then leads to disappointment and scepticism about CBD on the whole. The FDA has asked that CBD companies not make any premature claims about what CBD can treat, but newer companies tend not to pay much heed. So not only is it ethically dubious, it’s also illegal! This brings us to the next point.

There are several organisational issues within the CBD industry. A lack of regulation has led to companies having the freedom to use sketchy, cost-saving methods to increase profit margins. While there obviously isn’t anything inherently wrong with producing  cheap CBD, it does warrant some questions. Companies can source hemp from Europe or China, use cheaper extraction methods and skip testing their products for potency or quality – all of which will significantly reduce manufacturing costs, and will allow the company to lower their retail price. Users who try this CBD for its attractive pricing are understandably disappointed. In some cases, so called ‘CBD oil’ could contain zero CBD. In other cases, it could contain harmful solvents or pathogens that can give rise to side effects. So, what is the solution here? Just as you can’t believe all the marketing claims that a company makes, it’s important not to blindly trust the label either. This may sound odd, because if you can’t trust a label, what can you trust? The key things to look for would be:

A quick google search of the brand name should lead you to their website. Glance through the manufacturing process that states where the hemp comes from and whether it is organically grown.

Industry experts agree that supercritical CO2 extraction is the gold standard for producing CBD, because of its low impact on the environment and considerably lower chances of chemical residue compared to ethanol or butane extraction.

This is by far the most important asset to look for because it tells you whether the product is of good quality. Only purchase CBD from a brand that conducts third-party lab tests on their products for quality and potency.

It is unfortunate that shopping for CBD is a process that requires the consumer to do their due diligence, when the onus should be on companies to be responsible. However, the extra minutes that it takes to verify whether a company can be trusted will be immensely rewarding. Remember: just because a few CBD companies can’t be trusted, it doesn’t mean that CBD can’t be trusted.

Myth 7: CBD is the same regardless of the plant it comes from. 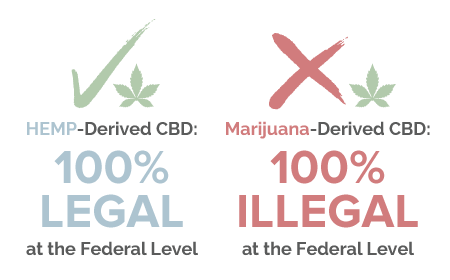 You might already know that CBD comes from the cannabis plant. But did you know that there are several different species of cannabis? Marijuana is popular for both medicinal and recreational purposes. The reason marijuana can get you ‘high’ is because it contains high concentrations of the compound THC. Hemp, on the other hand is popular for CBD production because of its low THC concentration, which means it’s unlikely to get a user high. An average marijuana plant contains about 4-30% THC, while hemp (by legal definition) must contain less than 0.3% THC. It’s this factor that makes all the difference. When the 2018 Farm Bill was passed, it legalized only hemp-derived CBD at the federal level. Marijuana-derived CBD continues to be illegal. Where your CBD comes from matters more than you know – if you get caught with it on a  flight, for instance, you could be detained.

Because of CBD’s origin in the cannabis plant, the compound has been unable to rid itself of the association with marijuana. While industry activists insist that both THC and CBD may have considerable medicinal benefits and therefore should be legalized, they also stress upon the fact that CBD is completely non-psychoactive. In other words, it won’t get you high. This is why banning CBD (in comparison to THC) makes little sense. Like we mentioned earlier, the concentrations of THC in the hemp plant are just too low to create any considerable psychoactive effects, even if you were to smoke the flower. This does come with a disclaimer though. If you’re taking extremely large doses of CBD oil that contains traces of THC, it could theoretically result in psychoactive effects. If you want to avoid this, opt for a CBD product that is  THC-free.

One of the strangest myths about CBD is that it is addictive and habit-forming. There is no evidence to support this, but might have developed as a theory because of its association with cannabis. It’s also worth mentioning that even marijuana and THC aren’t considered ‘addictive’ substances in the way that alcohol or opioids are. This isn’t to say that people can’t develop a psychological dependence on the high that marijuana causes, but a lack of THC won’t cause the profound clinical withdrawal symptoms caused by, say, quitting opiates. Regardless, since CBD doesn’t cause the same high, it is less likely to cause any kind of psychological dependence.

As you can probably tell, most misconceptions about CBD either paint it in a terrible light, or make it out to be a miracle panacea. What it really is, is a compound that has been found to add significant value to several people’s lives, in subtle, understated ways. What you can look forward to with consistent CBD use is better stress responses, a more balanced mood, fewer aches and pains and deeper sleep, to name a few. The coming together of these small, subtle changes can make all the difference. Why not try some CBD for yourself today?